Skip to content
Bodybuilders do not need to eat protein. There, I’ve said it. Before I’m accused of an ephedrine overdose or outright psychosis, permit me to qualify that seeming heresy. What bodybuilders – and everyone else – need are amino acids.

During the digestion process, whole-food proteins, such as milk, meat and eggs, are broken down into their elemental parts, which are amino acids. Twenty-two dietary amino acids have been identified. Eight are considered essential, in that they cannot be synthesized in the body but have to be supplied by food.
Essential amino acids

While all essential amino acids are vital for making gains in muscular size and strength-indeed, recent studies show that only the essential aminos are required in muscle protein synthesis – some of them are more vital than others.

Three – valine, isoleucine and leucine – are collectively known as thebranched-chain amino acids, so named because of their molecular structure, which features branched chains of carbon extending from their primary carbon structure. The BCAAs are unique because they’re not metabolized in the liver but in muscle instead. That’s why they’re called muscle aminos.

Leucine stands out as having the most anabolic properties. When you see ads for supplements that claim to “overcome genetic limitations” and that feature complicated diagrams of protein synthesis, you’re probably looking at an illustration of BCAA molecules, especially leucine.

Some popular protein supplements, such as whey, are effective primarily because of their rich BCAA content, although other aminos in whey, such ascysteine, offer considerable health benefits.

BCAAs offer a definite protein-sparing action in muscle during low-carbohydrate dieting. When glycogen stores in muscle and the liver are low as a result of limited carb intake, the body tends to tap into muscle aminos as a source of energy. That’s more likely to happen when total calories are very low in relation to exercise or when body fat is below a certain point.

The leaner you are, the higher the risk of tapping into muscle amino acid stores, especially during aerobic exercise. Taking BCAAs before cardio spares – that is, doesn’t gobble up-muscle aminos, thus preventing excess muscle protein breakdown during training.

Another controversy related to BCAAs is whether they improve exercise performance or efficiency. In one experiment, presented at the 2004 conference of the

National Strength and Conditioning Association, six healthy men took either BCAAs or a placebo, then engaged in weight training.When they took BCAAs, their levels of the stress hormone cortisol and creatine kinase, an enzyme released during muscle breakdown, went down and their testosterone count went up. The authors noted that participants who had more body fat needed a bigger dose of BCAAs to experience any anabolic effect.

Studies show a relationship between the oxidation, or burning, of fat in muscle and the subsequent oxidation of BCAAs in the body.1 Exercise promotes the activity of an enzyme (BCKDH) that controls BCAA oxidation. That implies that any exercise leading to fat oxidation also raises the requirement for BCAA intake, explaining why those engaged in endurance exercise, which uses fat as an energy source, need more BCAAs. The same may apply to those engaged in extensive aerobic exercise to lose body fat.

One great advantage of BCAAs is that they spare muscle under hard-training conditions.

In an experiment that used swimmers as subjects, one group received BCAA supplements, while another group got a placebo. Those in the BCAA group experienced decreased muscle breakdown following intensive exercise.2Elsewhere, researchers who observed the behavior of rat skeletal muscle found that BCAAs block catabolic pathways in muscle by activating ubiquitin lysosome enzymes.3

Sixteen women and 14 men took five grams of BCAAs prior to doing seven sets of 20-rep squats, resting two minutes between sets. Some of the subjects got a placebo. Those who took the BCAA supplement had significantly less soreness than the placebo group, the effect being more pronounced in the male than female subjects.

The authors suggest that the mechanism may be a combination BCAAs’ blunting muscle breakdown and leucine’s stimulation of muscle protein synthesis. 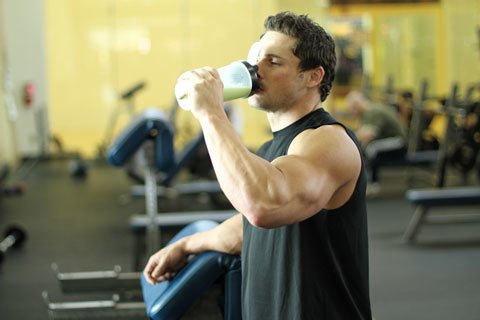 Acting against the muscle-eating stress hormone cortisol are anabolic hormones, such as testosterone, growth hormone and insulin. It turns out that BCAAs stimulate the activity of all three anabolic hormones, which may help explain why BCAAs spare muscle protein.5 Leucine in particular potently partners with insulin, which is anticatabolic and which, along with the essential aminos, encourages muscle protein synthesis.

Several studies point to leucine as a means of maintaining muscle, while dieting to lose body fat. If you do aerobics while dieting, taking a BCAA supplement prior to training-a dose of about five grams ought to do it – will prevent muscle loss. To get the most out of the BCAAs, include a source of vitamin B1, or thiamine, which is required for BCAA metabolism. A B-complex vitamin would work.