You hear it a lot don’t you? Experts say that you shouldn’t eat after 7pm as it’s harder to lose weight. Calories consumed after 6-7pm count more. But is this true?

There are a number of problems with this claim. Firstly, we all go to bed at different times, so how can eating after 7pm, have the same significance for someone who goes to bed at mid-night, compared to someone who retires at 9pm?

Secondly, calories are merely a measure of energy and their impact on the body is no different at different times of the day; a calorie at noon = a calorie at night. Arlene Spark, Associate Professor of Nutrition at the Hunter College in New York, stated that some people who eat at night do so after skimping all day, so when they finally eat at night they grab the first thing in sight, which is, quite often, junk food. 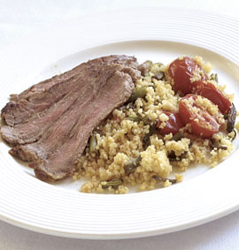 Furthermore, there are others who eat full meals during the day then nibble more at night, so get extra calories. In contrast, people who lose weight, or maintain a healthy weight do not tend to eat as much at night, usually because they get the calories they need during the day, and thus are better able to control cravings in the evening and stay within recommended calorie limits.

There are few studies properly looking at this behaviour in humans, but there are several animal studies which show that night-time calories are no more fattening than daytime ones. At the end of the day, the calories you take in must equal the calories you expend.

Thirdly, to lose weight efficiently, many of us benefit on small amounts of complex, fibrous carbohydrate foods, spread evenly through the day. Only have small portions, but do not omit these, as they help keep a steady faster metabolic rate. Going too long at night could actually mean you have a slower metabolism, so do not burn fat as efficiently.