Skip to content
For any bodybuilder, protein is the key to a good diet. For a hardgainer, the best way to get that protein is in the form of a gainer. But not all weight gainers are created equally, and I’d like to take a look at some of the qualities that they should have and some of the popular types of gainers so you can make an informed decision before you spend your money. 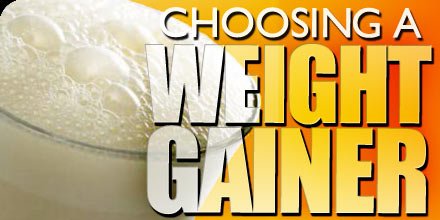 Evolution Of Gainers
Back in the day, weight gainers used to be fairly cheap protein powders loaded with sugar and fat to up the calorie content. The serving size would be something like 128 oz and the serving would contain 3000 calories. Not exactly a practical serving, and all that sugar kind of went against the idea of eating clean. Plus, the quality of the protein in the gainer was usually poor. Although many gainers like this still remain on the market, fortunately, the supplement industry has come a long way.
A quick side note on what I mean by “protein quality.” The quality of a protein is determined by how well your body can use it, a factor termed “biological value,” BV for short. This rating is calculated by taking the total nitrogen retained from eating a protein and dividing that by the total nitrogen absorbed by eating that protein.
Basically, it refers to how well and how fast your body actually gets and uses the protein. So a ptotein like whey isolate (BV 159) is the most readily absorbed, while a milk protein like casein (BV 77) is absorbed less readily and is said to be pf less quality. Now, sometimes it’s good to eat lower BV rated proteins because you want to absorb it slowly, like before you go to bed.
But generally, you want protein with a higher BV rating, because you’re body is getting more of the protein you’re ingesting, and more quality products use higher quality proteins.
Here’s a list of some common proteins with their BV:
Keep this information in mind whenever you buy a gainer, because you’ll be an informed customer when buying it.
Another thing to consider is how much sugar is contained in the gainer. Excess amounts of sugar have been shown to give an insulin spike, as well as increase levels of seratonin. This has been shown to give most people a feeling of drowsiness, irritability, and headaches. This doesn’t affect everyone, but some people are more sensitive than others. Plus, the insulin spike sets your body to storing fat. Look at the nutrition label on the gainer, and see how much sugar it contains, listed under the carbohydrates. Somewhere in the 30-60 gram range is pretty good.
This brings up the question of what you want in the carb/protein/fat ratio. You need carbs to help protein absorption, and you know you need the protein. Fats are definitely your friends in a gainer (though not saturated fat), as they seriously up the calorie content. A general rule of thumb is twice as much protein as fat, and twice as many carbs as protein.
Create Your Own
Don’t want to spend the money on a supplement and want to try to make your own gainer? It’s quite possible and effective. The easiest thing to do is get a regular protein powder, and mix in a few tablespoons of flax or canola oil and some fruit for flavor. You can also throw in some peanut butter or processed egg whites for more calories and protein. Be creative, you’ll be surprised how decent some of it tastes.
Here’s an example recipe:
16 oz. 2% milk
2 tablespoons canola oil
3 tablespoons peanut butter
1 banana
1 serving whey protein (example Optimum Nutrition’s 100% Whey)
Approx. Total: 820 calories
95 g carbs (40g sugars)
48g fat (but only 10g sat fat, plus lots of Omega 3)
53g protein
You don’t even have to buy a whey powder, you could use an egg substitute for protein, but whey powders are pretty affordable and I’d recommend that.
Popular Weight Gainers
Now to look at some specific weight gainers. I’ve examined some of the more popular ones for the qualities I’ve talked about, and given my opinion on them.
– Prolab’s N Large 2:

Prolab’s N Large 2Far and away my favorite weight gainer, ever. It contains 52 g of high quality ion-exchanged whey per serving. Both the chocolate and vanilla taste pretty good, and if you buy the 10 lb tub it’s pretty economical. In milk it has about 790 calories a serving, which is pretty good. The other thing I really like is there isn’t too much sugar, only 30 grams a serving, and only 5 g of fat. But it has 89 grams of carbs to refuel you and help you use all that protein. A top-notch gainer.
– Twinlab’s Super Gainer’s Fuel 2500:
This is one of those old-type of gainers. The directions tell you to take 3 scoops in 24 oz of milk, giving you a gainer with 2140 calories, 50 g of protein, 485 g of carbs (over 120 in sugar), and 1g of fat. That’s crazy for one serving, so if you cut it in thirds you’ll see that the protein content is pretty low, plus it’s just milk and egg white protein. Even though it’s pretty cheap, I think there are better gainers out there.
– Champion Nutrition Super Heavyweight Gainer:

This is a good gainer that really tastes great. It contains 1200 calories a serving, 50 g of protein, 108 g of carbs (57 g of sugar), and it contains whey concentrate and egg protein. The fat content is higher than the others, 29g, but that’s how they get the calories so high, plus it’s low in sat fat and has a lot of Omega 3. It’s a little more expensive and the sugar is high, but all in all it’s a pretty good gainer.
– EAS Myoplex Mass:
This is EAS so you know it’s going to be expensive. It’s also sold in packets like an MRP. Per serving, it’s 500 calories, 76 g carbs (28 sugar), 7g fat, 33g protein (whey concentrate and casein). It’s decent, though I like more calories from my gainer. Sure does taste good, but for the money, I want more from a gainer.
– Weider Mega Mass 4000:

Weider Mega Mass 4000Another old-type gainer, though if you split the servings it’s not bad. It says to mix 3 cups of powder with 3 cups of milk for 1680 calories 313 carbs with 136 g of sugar! Again, way too much. Split it in thirds, you get 560 calories, 105g of carbs (45g of sugar), 28 g of protein (whey, casein, and soy), 4g of fat. This is decent, but not great.
There are better gainers out there, but it’s all up to you. This one does taste pretty good.
Conclusion
So there you have it. Hopefully, this will help you in making a decision the next time you go to buy a weight gainer. So much of it is personal preference, but there are a lot of factors I hope I’ve demonstrated that make some gainers better than others. Good luck and e-mail me with any questions!
Thanks,
Article Source: Bodybuilding.com