Skip to content
He had his own era. From 1984 to 1991, Lee Haney won a record eight consecutive Mr. Olympia’s before retiring from the stage at only 31. At 5’11 and 240, he was a transitional figure, ushering bodybuilding from the “lightweight era” of under-200 Mr. O’s just before him to the modern era of mass monsters that followed just after. Haney bridged this gap by combining a new level of size with a tight waist and classical lines bodybuilder . Call it mass with class. His torso muscles (back, chest, delts, traps) were his strength, so we got the Totally Awesome one to speak about the chest workout training that spawned the Haney Era. 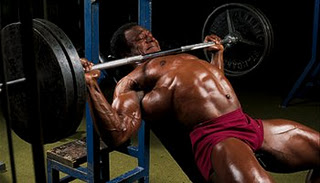 HANEY ON CHEST BASICS
“I never needed a machine to train my chest. Barbells, dumbbells, dipping bars–those are the basics. About as fancy as I got was a cable crossover machine. But really what builds chest muscle is working the barbell and dumbbell presses and flyes. You just can’t improve on those basic exercises.”