Skip to content
Last year’s seventh at the Olympia was considered a major step backwards for Kai Greene, the sort that had many, including Greene himself, reevaluating his career. But let’s put it in perspective. First, even on his biggest off-day in four years, he missed the Olympia posedown by a single place. In other words, even at his worst, he was still the seventh best bodybuilder in the world! Second, let’s not forget that before then he had won five of his previous six contests. The one loss was a fourth at his debut Olympia, and two of the wins were at the Arnold Classic. Everywhere but the Olympia stage, Greene has been unbeatable. Which brings us to the New York Pro on May 28, where Greene competes for the first time since last year’s O. As he preps to flex again in his hometown, he talks about two of the parts he’ll be showcasing: his calves. 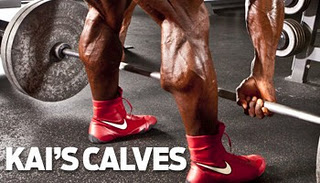 “I alternate my heels [heels in or heels out] during sets of calf raises to focus on either the inner or outer parts of my calves. Some people like to do separate sets, but I’ll pause during the set and change position. Then I might pause again and change it again. It all goes by how I feel. I just want to feel that every part of my calves gets worked to the maximum.”