Competitive bodybuilders across the globe know that creatine is a key substance used for muscle development. As an often misunderstood chemical and supplement, the average fitness fan might be deterred from trying creatine. This is particularly true because contradictory information about creatine can make it difficult to distinguish exactly what it is and how it might be important to your health. 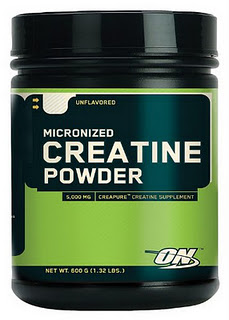 The liver, kidneys and pancreas naturally produce the amino acid creatine, which is converted into phosphocreatine during normal metabolic processes and then stored in the muscle cells. Natural creatine aids in the production of the primary energy source for muscle called adenosine triphosphate or ATP. During muscle movement short spurts of ATP is released into the muscle cells and metabolizes down into adenosine diphosphate, or ADP. The ADP is what actually gives muscle the power to contract and transfer energy from cell to cell. Creatine acts as a reservation system for ATP and replenishes muscle cells immediately after the breakdown into ADP. The more creatine in the body, the quicker ATP reloads the muscle cells.

The constant, rapid regeneration of the creatine cycle plays a markedly important role in normal muscular health, acting as a shuttle of sorts for constant muscle energy. Naturally low levels of creatine or inefficient creatine transport at any point in the creatine cycle can result in muscle wasting, weakness and fatigue. Factors contributing to low levels of creatine include: genetic deficiency disorders impacting the proper synthesis of creatine in the body, kidney disease that causes complications in creatine transport and chronic overuse of supplements that desensitizes the body from producing its own natural creatine stores.

Creatine and Muscle Building
When it comes to building muscle mass, creatine is the pinnacle performance supplement. Clinical studies confirm that creatine supplements used in conjunction with routine strength training exercise not only amplifies muscle size but also increases muscle strength. The key in its effects is to combine creatine with working out, not to take creatine and expect that your muscles will automatically explode without doing any work.

Creatine supplements produce these positive effects by inducing muscle cell swelling through water retention. Essentially, the supplement allows for greater hydration of the muscle cells and in turn this produces the appearance of bigger, fuller muscles. The muscle building benefits do not end there. As an amino acid, which is the building block of protein needed for muscle growth, creatine stimulates muscle protein synthesis to maximize the protein supplied to the muscle cells for sustaining bulking gains. Creatine itself is not the cause of massive muscle bulk. It serves as an avenue for activating your muscles to receive all the chemicals needed to achieve a powerful pump, and with persistence this will cause muscle gain. Once you stop using creatine supplements, the muscle built from regular strength training, will remain. What changes in ceasing creatine use is the amount of water retained in your muscle cells. It is for this reason that taking creatine supplements causes weight gain because it is water weight that you gain.

Sources, Doses, Adverse Effects
Several precursor amino acids natural in the body promote creatine synthesis but this typically can only occur if your dietary habits support the production of the precursor amino acids. A diet plentiful in animal-based proteins enhances the generation of extra creatine fuel for the muscles. However, the quickest and most efficient means for producing extra creatine in the body comes from supplemental sources.

Supplemental creatine in the form of creatine monohydrate, is the most commonly used and researched variety for muscle building. It comes as a powder, liquid, capsule or chewable supplement as well as an additive in sports drinks or energy bars. Dosing of the creatine supplement varies but a typical load for improving exercise performance involves taking 5 grams at a time, four times daily for two to seven days in a row. After loading, take a lower dose at 2 grams daily, to maintain its beneficial effects on muscle bulking.
Your body will only absorb a certain amount of supplemental creatine. During the loading phase, creatine levels reach a saturation point. Once that saturation point is achieved, taking doses higher than recommended for longer than recommended can cause adverse effects.

Side effects of creatine use include: muscle cramping, dehydration, diarrhea or nausea. If you have any form of kidney disease, taking creatine supplements is not suggested because you kidneys cannot properly filter out the byproduct creatinine, produced during the metabolic break down of creatine. Creatine supplements are legal and generally recognized as safe. However, the safety and effectiveness of long term use has not been clinically established and research is ongoing.