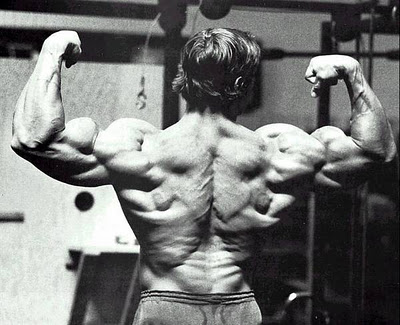 When you think of the Mr. Olympia contest, what usually comes to mind?
Yes, massive physiques crammed with tons of muscle, but something else too.
Massive and complete back development.
And it should, after all four of the most dominant Mr. Olympia winners of all time had serious back development.
From Arnold to Lee to Dorian and to Ronnie, all four of these champions owned backs that were far ahead of their competitors.
O.K.
So how can you go about building a back like these champions-one that is massive and complete from top to bottom?
Read on to find out how.

SIMPLE IS BEST
One of the reasons, I feel people do not make as many gains as they should, is because they complicate things.
Bodybuilders feel they need tons of exercises in order for things to go right in the gym.
Not true.

THE BACK ONE TWO PUNCH
After a good a warm-up bust out as many sets as you can of either chins or pull-ups-you can alternate between the two if you would like.
Then move on over and do five sets of five on either barbell bent over rows with an over hand grip or with an under hand grip.
Again, like with the chins and pull-ups, feel free to alternate between the two at every other workout as each version works the back slightly differently–just what you want.

A COUPLE OF POINTS
I know some people might be saying, what if you cannot do very many chins with an overhand grip.
No problem.
Just work on doing one or two more at every other workout and before you know it you will be able to do sets of ten to twelve reps in good form-and your back will show it.
Also, some might think that with just two exercises-four if you count the different grips-this cannot be enough.
True, but again, I feel most people over-complicate things.
Do yourself a favor give this routine a try for a couple of months, provided you are working it hard, and then if you feel you need more you can start adding in exercises like dead lifts and the like.
Lastly, once you get used to the rows, feel free to mix up the rep ranges at each workout-for example at one you can do the five sets of five and then at another you can do sets of eight to twelve and at yet another you can try sets of twenty reps.
Each rep range will work the muscles a bit differently so it is a good thing to mix it up.

CONCLUSION
I know the above routine looks overly basic, but trust me, if you really put your head down and work the exercises hard your back will start to develop in ways you never thought possible.