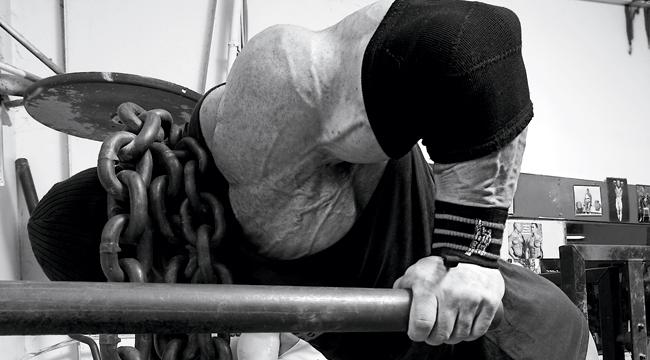 Over recent years the use of chains in chest workouts became very popular. Many athletes and bodybuilders use them mainly for bench-press lockouts, but professional bodybuilder from the USA Branch Warren showed to the whole world that we can also use chains to weight down the dips. Warren is famous for his backbreaking and killing trainings. He reached the legendary status once photo of him dipping with three huge chains swallowing his head had appeared in the Internet. It marked a new era of bodybuilding. Everybody started copying him and dipping the iron around the neck.

Digging the iron chains over the neck is much better than over the belt. For some people it’s just too painful to deal with weight on the belt, while the neck is much stronger. Suspending weight from the belt requires more strength in the abdomen to hold it, while a chain hanging from your neck will naturally put you into a more forward lean, which puts more emphasize on your chest.

■ Most chains weigh 30–60 pounds. Use one you can get at least eight full reps with.

■ If you can get more than 15 reps, use a heavier chain or add a second one.

■ Make your final set a dropset. Get as many reps as you can, shed the chain, then keep going weight-free.

■ If you’re strong enough, you can do multiple drops, shedding a chain each time you reach failure, before ending with only your body weight