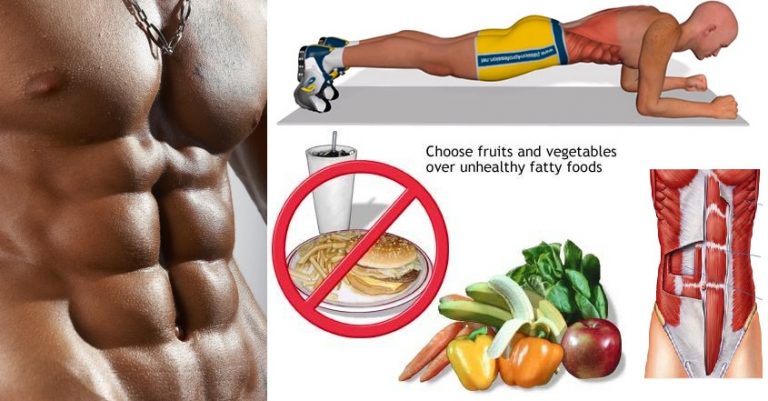 If you’re looking for an easy way to get a six pack, you need to be prepared to make some drastic changes in your lifestyle! If you are super-active but have a beer belly, it’s very possible to get a six pack in a relatively short amount of time!

You must, however be committed to making this goal happen. Look at the five lifestyle changes you have to undergo and think – would you rather have bad, unhealthy foods or have a great body?

If you know abs is the answer, read on! Today you’re going to start progressing towards awesome abs!

Six pack abs are all about losing as much belly fat as possible. Once you blast off that massive layer of fat, your ab muscle (rectus abdominis) can be seen by the world, loud and proud!

One of the easiest ways to blast off that fat is to stop eating the foods that make you fat in the first place! Foods to instantly stop having include: deep fried fatty foods, sodas, cakes, fast food and anything overly processed or oily.

Generally, the less processed and more natural a food is, the better it’s going to be for fat loss! Another rule of thumb is that the longer it can last in your fridge, the more fatty it’s going to make you. Think about it – stuff that stays in your pantry for extended periods of time is most likely going to be bad for you, salty chips, sugary sweets and preservative-laden cookies are just a few examples.

Here’s another dietary change for you – cut out refined carbs! Refined carbs are carbs that are processed and have the fibre removed, making it easily digestible! When it’s easily digestible and devoid of nutrients, it spikes your insulin and blood sugar levels, storing as fat SUPER quickly!

White bread is a great example of a food you should get rid of! It doesn’t look unhealthy (and it tastes pretty good) but the grains have had fibre removed, making it super fast-digesting and super fattening!

Generally, rice, breads, cereals, pastries and anything made from white flour are fattening refined carbs! Cut these out of your diet and it’ll make a MASSIVE difference in the amount of fat you store or lose.

For a great carb source, try leafy green vegetables, other vegetables and fruits for carbs! A diet high in sources of good fats such as avocado and olive oil are other great sources of energy!

Try cutting the bad, fattening foods and adding some good ones and notice your six pack progress accelerate!

Strength training, whether it’s weights or bodyweight exercises is GREAT for boosting fat loss and looking even better when you finally get that six pack showing!

Strength training involves explosive movements that require high amounts of force, muscle contraction and oxygen usage! Work enough muscles in a session and your body will actually burn fat AFTER the session to recover, replenish oxygen and refuel energy sources!

For a maximum afterburn effect, a great principle to keep in mind is to use maximum energy for maximum fat loss. It works in a very simple way – the more energy you use up at a high intensity, the more fat your body has to burn afterwards to recover!

This principle can be applied to the types of movements you do! If you do compound movements, movements where you are utilising multiple muscle groups, you will be demanding more energy and effort as you move weights or your body a longer distance!

For example, doing a shoulder press (a compound movement activating not just your shoulders but whole arms) will have a greater fat burning impact than a lateral shoulder raise (an isolation movement using less muscles).

Apply this principle to your workout: compound movements over the whole body and watch your body burn a HEAP of fat as it has to repair more muscle tissue to recover!

Protein is the building block of muscle-building and in high enough quantities can greatly assist with fat loss and getting a six pack!

When you boost the protein in your diet, you consume more amino acids that encourage fat-burning and muscle-building! Ornithiene, lysine and arginine are amino acids that stimulate the secretion of growth hormone, a key fat burning hormone. Leucine helps signal to your brain that you’re full, causing you to eat less empty calories!

If you are on a medium or low protein diet, boosting your protein might be a great way to supercharge your six pack progress!

Get Your Six Pack

Getting a six pack is all about eating and living healthy! The quicker you make changes to your diet and exercise regime the faster you’re going to get results! The principles for getting a six pack are simple – but it takes hard work and some major changes to get there quickly!

Luckily, once you get amazing abs, all the lifestyle choices become easier and easier to perform. Apply all of these methods to your lifestyle and watch your six pack progress accelerate like crazy!